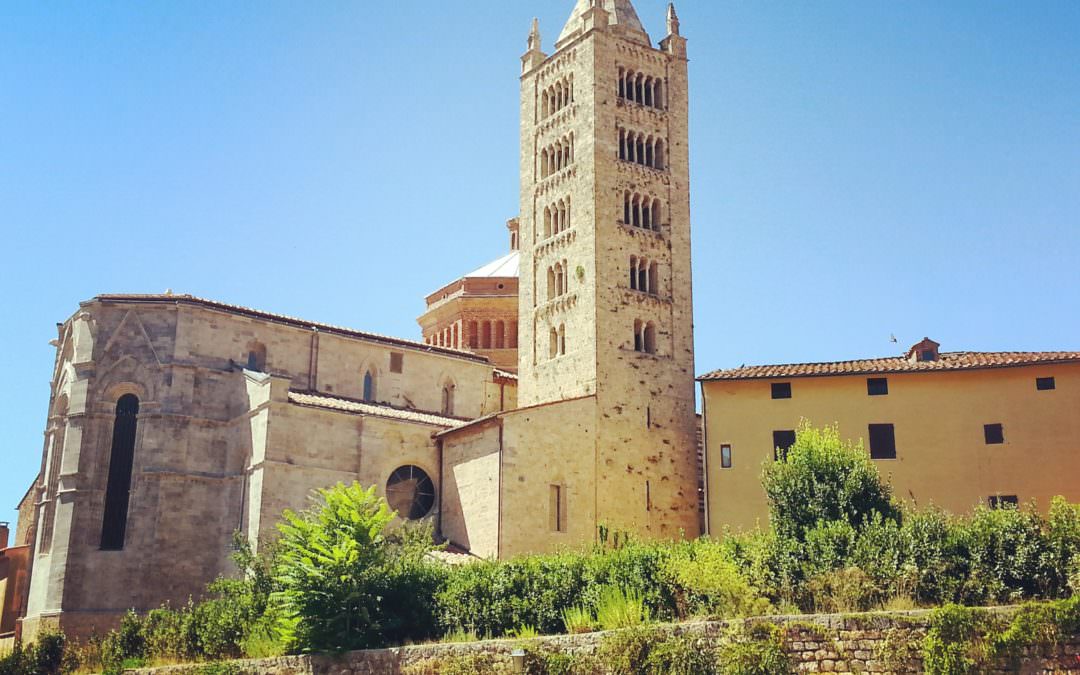 For a cyclist part of the beauty of cycling in Tuscany is the endless network of quiet roads between medieval hilltop towns. I spent a few days in August exploring and cycling around Massa Marittima. Massa is a historical mining town in the Maremma region of Tuscany.

Starting any ride from Tuscany means starting the day with a descent. That’s the way of life in the hilltop villages. I ate a quick breakfast in the center of town before heading out. It was the usual sugary Italian breakfast of fresh squeezed orange juice and a brioche. After eating I began my descent out of town. 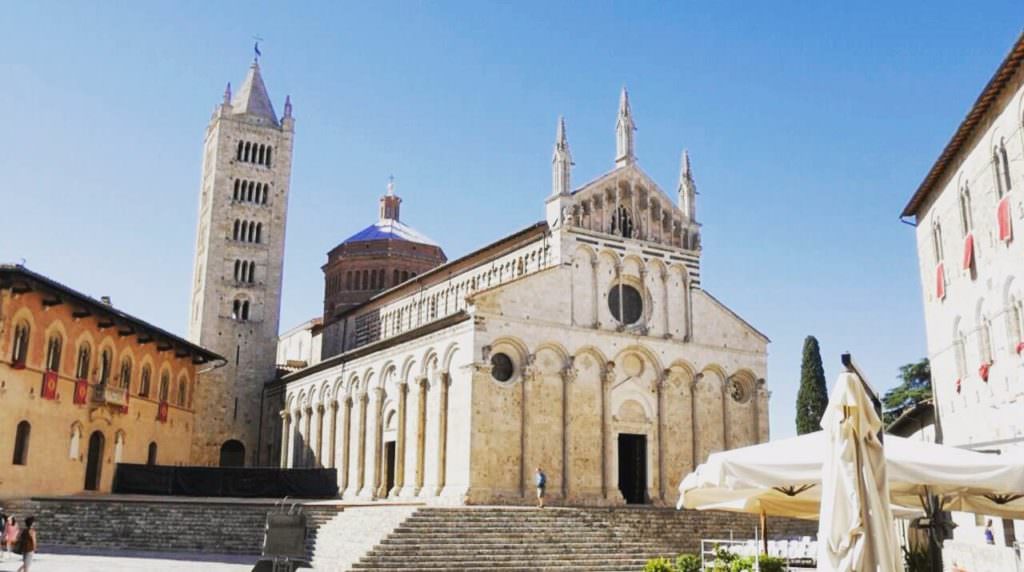 The descent was a quick 2-3 km from the south side of the town. At the bottom of the descent, I took a left turn onto a small provincial road, avoiding the main road to the seaside. It was amazing to go from a bustling town full of tourists, to a quiet wooded road in just a few short minutes. All of my turns on this ride were left turns. I had planned to make one large loop around Massa Marittima.

In Tuscany you aren’t descending, you’re climbing. There is little completely flat terrain. As soon as I made the first left turn, the road pitched up. At the top of the little climb, the woods opened up and gave way to golden rolling hills, with vineyards on the left and a lake on the right. As I pedaled along I rode past various local vineyards, agriturismo hotels, and the Petti tomato farm. Huge open cargo truck containers were overflowing with red ripe Roma tomatoes.

After about 30 km, I rode through the small town of Ribolla. On the other side of Ribolla, the road started to climb steadily and easily. Looking through the maritime pine trees, olive orchards and cypress trees, the town of Montemassi slowly came into view in the distance. I reached the turnoff and began climbing up to Montemassi. Several groups of cyclists flew past me coming the other way on the descent. We smiled and said ciao, all of us happy to be out on our bikes. 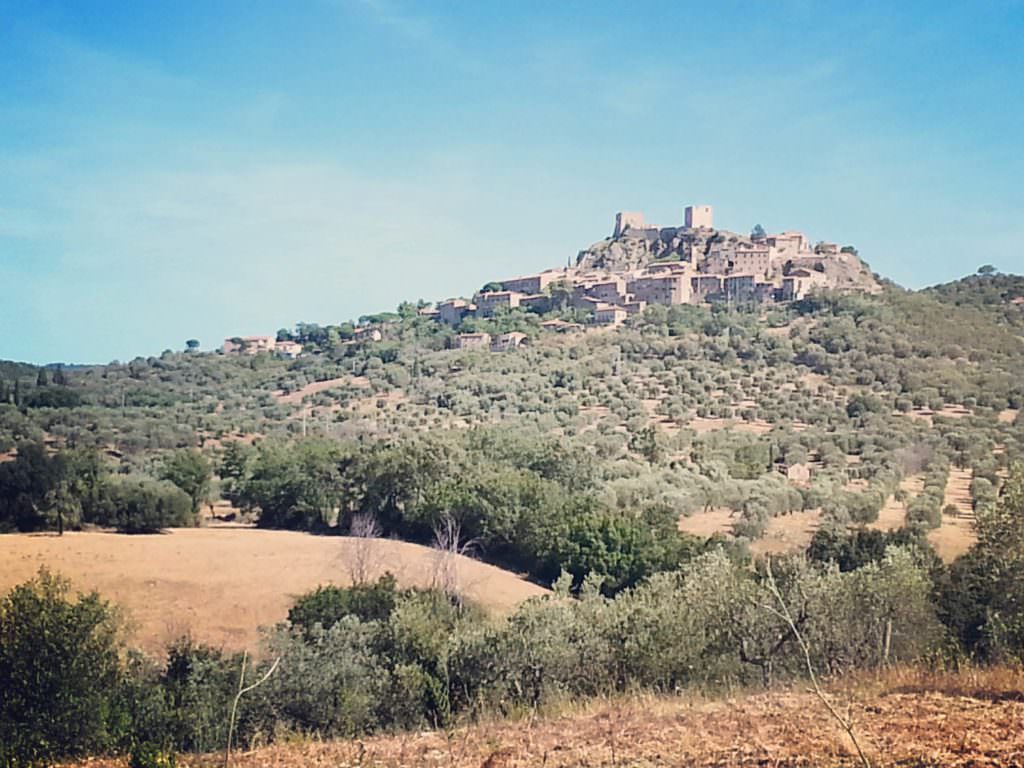 I reached the historic part of Montemassi after a 2 km climb. Down the valley to the left, I could see all the way to the Mediterranean sea in the distance.  I kept pedalling. As the road continued up, the sun became more intense. After a few steep pitches I felt like the last bit of my sugary breakfast had burned off. I had been climbing constantly for about 8 km at that point and could tell that my energy tank was near empty. Thankfully, in Italy it’s never too far to the nearest coffee bar, even in the middle of nowhere.

A total climb of 10k along the twisty ridge line finally brought me to the intersection for the next town of Prata. While there was no bar to be found at the top of the climb, a few kilometers of twisty descent led me finally to a coffee bar, where I refuelled with a caffè macchiato and a sweet and salty crunchy peanut treat. Inside there were four older local cyclists with matching club kit discussing their morning ride plans. Outside was a German couple pulling bikes out of their car and getting ready to ride. I easily found more people cycling in Tuscany than driving out on these roads.. just as it should be. 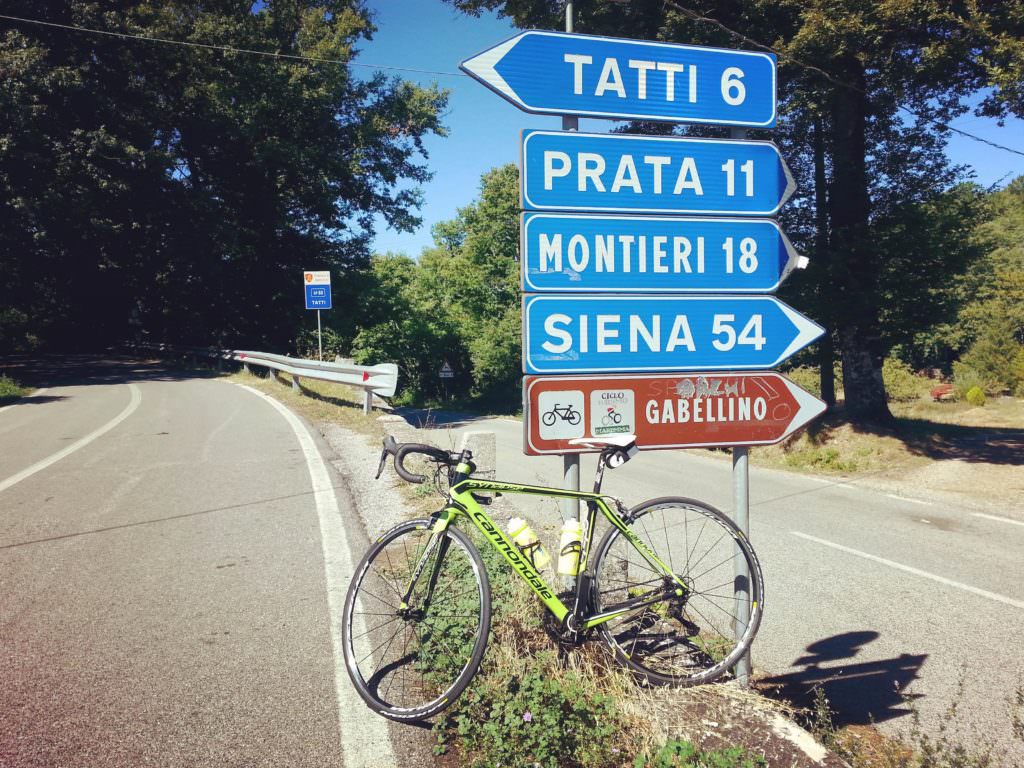 Prata appeared on my right after 7 km. From here I could choose to either climb up to Prata or take a bridge overpass across the valley. Having just recovered my energy and knowing I still had the final climb back up to Massa Marittima, I chose the bridge. It was nice, but I of course regretted not taking the road up into the town.  After Prata, there was a long descent back down into the valley. Twisty and narrow, but not too technical. 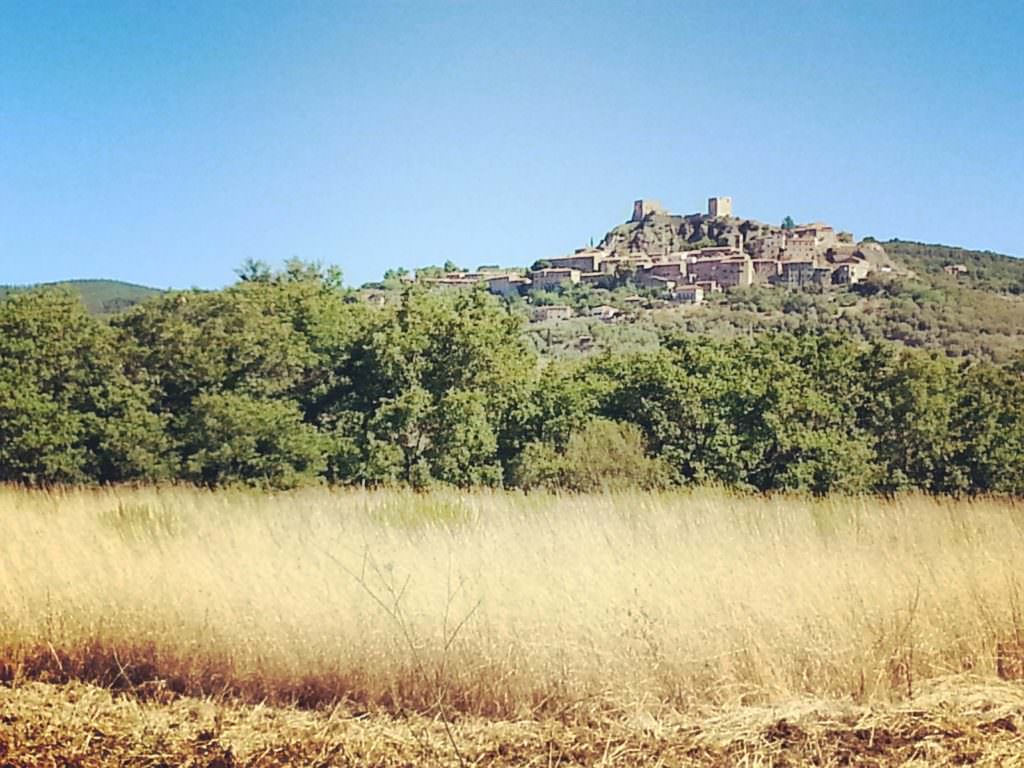 The bottom of this descent brought me to the northern side of Massa Marittima, and the start of the climb back up into town. The last little bit was a killer, a few hundred steep meters to reach the top of town, after my legs were already jelly. (Strava details for this ride are here) After a quick shower I grabbed some salame and pecorino sandwiches from the local baker. I drove to the sea in Punta Ala, relaxed by the sea and watched the sun set.

It would have been difficult to have a more perfect day on the bike anywhere. This is the reason cycling in Tuscany is so fabulous. Join us on one of our tours!