Home » Update » How to watch The Tour de France

How to watch The Tour de France

I first experience the Tour de France live in 1996 with Peter Boynton, the then owner of Europeds. He had run Outfitter Bicycle Tours first Dordogne tour for us, and I was on my way to Geneva to visit friends and he was heading to the Swiss Alpes to lead a hiking tour. We were driving and planned on seeing a tour stage along the way. The young American star Lance Armstrong was in this tour, maybe his first or second. So I got up on a wall in a small village, in the pouring rain, and as the muddy riders flew by I hollered “go Armstrong” at every rider as they flew by. I decided that was not the best way to see the race. Later I discovered that Armstrong had dropped out of the race a village before ours . . . so he never came by let alone hear me holler. That fall he was diagnosed with cancer. Even so, I was hooked. In 1998 we hired an Irish tour company to run a tour in the west of Ireland and then see the 1st 3 stages of the Tour de France starting in Dublin. This REALLY got me hooked. So we saw some portion of the Tour every year there after. I did 2 tours with another tour company, one which followed parts of the Tour de France and the next year the Giro d’Italia. I concluded we could do it better, so in 2000 we ran our first TdF Tour in the Alpes and in 2001 the Pyrenees. OBT has been doing it every year since. 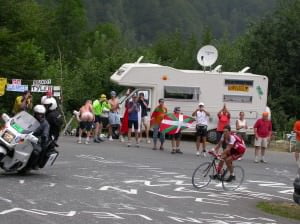 There are many ways to watch the tour, from the TV to the side of the road and if you have enough money in the Viewing Stands at the Start or Finish, or really a lot of money, a helicopter or a Team Car. The problem is to figure out how to get the most out of the entire experience, without going broke. After all, the whole thing flies by in just a few minutes.

So here is my favorite way to spectate and watch the Tour de France. First you ride the big climbs in advance on your own bike. That way you know how tough it is. Then on race day you ride your bike to a restaurant with TV that is on the race route. You want to be sure you have easy access to the van for after the race. Then you get a good seat where you can see the TV and order lunch. Then you can keep your table all day. When you hear the people outside hollering you run out and watch the Race Caravan go by. It is a traveling circus of TdF sponsor vehicles passing out all kinds of race memorabilia and is great fun. When it passes, it is usually about 45 minutes before the race gets there, so you go back to your table, order another drink and watch the race again on the TV. When you hear helicopters overhead, you know the race is not far away, so you rush outside, secure a good viewing spot and wait for the race to go by. Be sure to remember your camera. After the riders go by head back to the TV and watch the race finish, going up the climbs you did yourself . . . but you were probably a bit slower. Then the hollering starts. the place is probably full of cycle fans from many of the countries participating, everyone rooting for their own guy! Very exciting, loud and fun. Great comradery. This was particularly exciting during Armstrong’s heyday. We did this on all of his mountain top finishes. In 2015 with 6 mountain top finishes, this is a perfect way to watch . . . but having rode the actual climb yourself is what really makes it personal.

Any questions I can be reached at: DickPowell53@aol.com. OBT’s itineraries for 2015 Tour de France tours are HERE.  Hope to see you there. I will be on the 8 Day/7 Night Tour.