After running “luxury and easy” bike tours for a few years as Outfitter Tours, doing the Dordogne, Provence and Normandy, we decided to go on some other tour companies bike tours. We saw the 1st 3 stages of the 1998 Tour de France which started in Ireland and love riding our bike and watching the tour. Then I went on a Breaking Away Tour de France tour and was hooked, but knew I could do it better! Breaking Away chased the tour around in vans . . .fun but not enough riding. 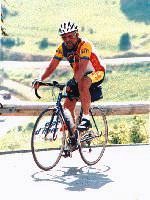 I wanted to do what we did with our other tours, make riding the bike the point and riding from hotel to hotel, and making race watching secondary. So we would ride a major climb like the Madeleine and the next day the Telegraphe and then the next day over the Galibier and up L’Alpe-d’Huez. Spend a night there and watch the race come up the next day and finish there. The race coverage on TV is outstanding there and to watch the racers fly up what we had struggled doing in 3 days, puts you in awe of these guys and makes a much better experience than trying to see every stage. So for from 2000 to 2010 when we sold OBT to Jamie & Joy, that is what we did. Minimize van time and maximize riding the great climbs. Now Marilyn would have nothing to do with this type of tour, at least not ride it. Climbing was not her thing, but I loved it.

I also did a Giro d’Italia tour with Breaking Away and we started doing that as well. We specialized in the Dolomite stages and flew in and out of Venice and had some amazing experiences. At the Giro you can get more up close and intimate with the riders, less controls. One year we had the Discovery Channel Team in our hotel and dining room which was special, they had won the stage that day and were poised to win the Pink Jersey the next day, which they did. I tried to charge our clients extra for this experience but they threw me in the lake instead.

Oh well, but these race tours were all a very special time in my life and if you have not done one, check out Jamie and Joy’s offerings. They are very special experiences.