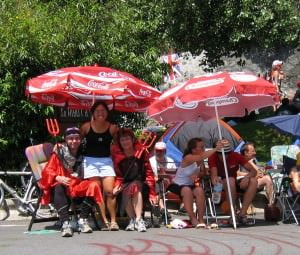 Every year in July, live coverage of a bike race has consistently gotten us out of bed at the break of dawn.  We would look forward to it like a 6 year old looks forward to Christmas morning.

In 2004, I spectated le Tour de France in person for the first time in my life.  Needless to say, it was quite the experience.  In fact, it was a dream come true!  It was my third time to visit France, however the first time with my bike.  I was traveling with my mom (she was my SAG), and we had multiple adventures that we still talk about to this day.  I met some amazing people, including a certain very special someone;), the food was amazing and the riding was truly epic!  It was Lance’s 6th win that year, which was history in the making.

On Alpe d’Huez with Didi’s cousins

Every year following that 2004 Tour, that very special someone and I have thrown a Tour de France party during the 3 weeks of bicycle racing excitement.  We would spend weeks preparing!  The premise was to celebrate the greatest bike race in the world.  We made our party an opportunity to familiarize our friends who knew very little about le Tour with enough information to appreciate men wearing spandex while riding bikes with skinny tires through France.

“Think of a Superbowl party times 10!” I would tell people.  We would serve chocolat et fromage fondues and other French goodies such as chèvre, beet, and endive salad with a mustard vinaigrette; and potatoes done two ways in the Lyonnaise and Savoyarde fashion.  Our guests would bring something to dip and share, and something to sip on.  Every year we would have a magnificent spread!  For dessert (in addition to the chocolat fondue), I make a red wine ice cream (vanilla base with about a 1/4 cup of reduced Cab Sauv from a whole bottle), madeleines, and meringues.  The aroma of stinky cheese, wine, and kirsch would fill our home.

One year we even had a maillot jaune piñata.  A game of “Tour de France Jeopardie” has been a frequent hit as well, where guests draw from a bowl a photo of a jersey to designate their team and “sign in” to our guest book.  Answer categories include “Tour Jerseys,” “Nicknames,” “Bikes,” and “Tour History” to name a few.  Double Jeopardie was always super fun with betting and products of French origin given as prizes.  Our friends generally left enlightened with le Tour knowledge and full bellies. 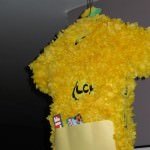 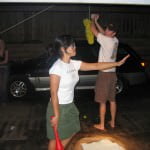 We stuffed the piñata with French bon bons and even a GU or 2!

Then our tradition began to evolve three years ago in 2010.  Our 6th annual Tour Party took place after le Tour since we were in France to spectate le Tour in person again!  An interesting conversation ensued during that trip that involved taking over a certain bicycle tour company… 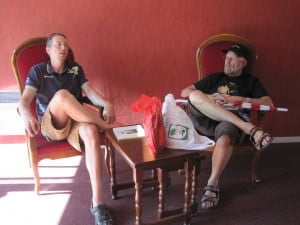 Jamie talking with Dick about the future of OBT

You can guess what happened next, oui?  In 2011, we guided our first tours in France (one of which was during le Tour)!!  We held off on throwing a 7th annual Tour Party when we returned stateside, because our first child was born!

Things, like species, evolve to survive in their environment.  Traditions must evolve to continue bringing meaning to people’s lives.  I feel so fortunate to have our tradition of throwing our Tour de France party during le Tour evolve into providing the opportunity to spectate le Tour live in France.  Now, this is truly living a dream!

This year, I’m convinced we’re going to do a little something when we return.  It may not be as big as our previous Tour Parties but we will definitely enjoy some fondue with friends, show photos of our time in France, and perhaps watch some footage of the greatest bike race in the world.