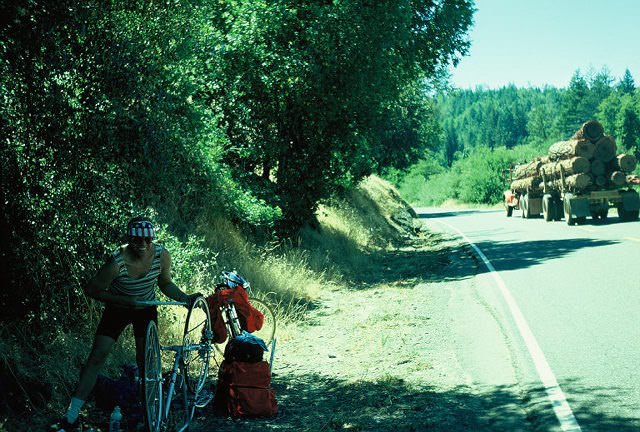 I am so happy Jamie has added Napa & Sonoma California Wine Country tours. This is where Marilyn and I began our bike touring back in 1974. It all started with me quitting smoking and rewarding myself with a quality bicycle after 2 months. This led to our 1st tour the same year and our love of bicycle touring and eventually creating a bicycle touring speciality store, The Bicycle Outfitter. 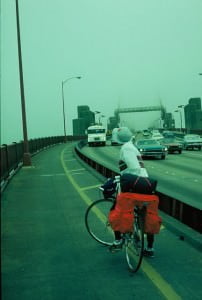 Marilyn on the Golden Gate Bridge in the 1970s. Note all the weight at the back of the bike. It made for a poorly handling ride.

We had never bike toured and knew nothing about it. Also, there were no bike shops that carried touring gear. We chose a “self supported” adventure starting in San Francisco, crossing the Golden Gate Bridge to Sausalito and on to Olema to camp for the 1st night. We then went into the Alexander Valley camping, then over to the coast camping at Hendy Woods State Park, en route and to our most northern point at Fork Bragg and a motel for 2 nights. Then down Hiway 1 using camping and hotels and back to SF. It was tough carring our stuff and we knew nothing about how to pack and equipment and proper tires. Did I mention proper gears? But, we got hooked anyway. We did 2 other tours in California Wine Country leading groups in later years. Starting The Bicycle Outfitter in 1976 slowed our touring a bit. 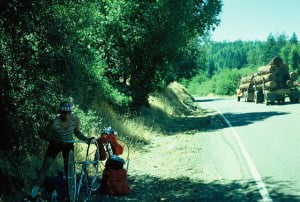 Dick Repairing a Tubular Tire in the 1970s on a Northern California Road.

In 1985 we took our 1st European bike tour and fell in love with European cycling. We cycled across France from the Dordogne to Provence. This led to starting Outfitter Bicycle Tours with guided tours in 1996 in the Dordogne and then expanding to other venues in France, Ireland, Italy and Hawaii. We did self supported, guided and self guided over the years, and prefer Self Guided with friends. They offer more freedom and options to customize and you get to choose who you vacation with.

Also in 1996 I visited the Tour de France for the 1st time and got hooked again. This became my love, while Marilyn and I together did self guided B&B tours with not too many hills and no mountains. Next time I will talk about “race tours”, seeing the Tour de France and Giro. OBT’s specialty has always been the riding of the famous climbs and then seeing the race . . . . and keeping the tour size small so we can use small family run boutique hotels and B&B and keep the tour prices low. The Armstrong years were exciting as an American and our tours always filled early. One hotel operator in the Pyrenees when asked if he liked Armstrong replied: “Armstrong is good for commerce”. He was, but that is another story.