Want to see more of Tuscany than what regular paved roads will show you? We are now offering a guided Tuscany mountain bike tours in a fashion very similar to our self guided tours – YOU name the dates of the tour. The below itinerary follows the recently restored original route of the ancient Via Francigena, a major Medieval pilgrimage way that connected Northern Europe to Rome. Mentioned for the first time in 909 AD by the Archibishop of Canterbury Sigerico (who described his journey back home from Rome to Canterbury), the Tuscan stretch of the Via Francigena passes through Val d’Elsa and Val d’Orcia. You’ll be riding the most scenic part of this route from Castelfiorentino to Ponte a Rigo passing San Gimignano, Monteriggioni, Siena, Buonconvento and Montalcino. Rich in history and natural beauty, It follows a breathtaking circuit through the Tuscan hills, woods, and fields. You will encounter monasteries, castles, hospices that welcome pilgrims, ancient walled communities, and riding sections of paved roads that go back to Roman and Medieval times. A stunning way to combine a beautiful vacation with the passion of cycling.

This tour is being led by our long-time Tuscany guide, Bruno Baldini. He is a native of Florence with a passion for the mountain bike. He knows every trail in the region like the back of his riding glove, and loves sharing his favorites. This is a guided tour, so Bruno will be with you the entire way.

In true OBT style we have put together a tour that is not overly intimidating. The rides will be challenging, but don’t worry about hour after hour of technical single track. These trails and roads have been selected to challenge, but not break you. Rental bikes are available. All breakfasts and dinners are provided. Lunches are on your own, which you can enjoy finding in the small villages and cafes along the way.

See full itinerary below. We can customize as you wish. Or click here to learn more about all of our Tuscany bike tours.

Dates: Your pick! We offer tours in Tuscany as early as March and as late as October and into November.
Length: 8 days, 7 nights
Service: Fully Guided and Supported.
Type of riding: Hilly with off and on-road sections.
Bikes suggested: Mountain Bikes
Average daily riding: 35km
Start city: Florence
Finish city: Florence
Suggested transport: Fly or train to Florence from anywhere.

We generally target 3 and 4-star hotels, which we hand select to maximize comfort while minimizing cost. The star rating is using a French rating system, which has proven to be the standard around the world. Therefore we use the same standards in France and beyond.

Over the years we have developed relationships with many amazing 3 and 4-star properties that distinguish themselves as providing much more than their rating suggests. We have loved getting to know these hotels and sharing them with our guests. For tour groups wishing to upgrade their accommodations, we can provide custom pricing for four and five-star hotels, pending availability. Below are an example of some of our favorite hotels in the region that we target using on our tours, pending availability.

Mountain Bikes: Our rental mountain bikes are hardtail with a front suspension. Perfect for the local trails!  Reach out to us if you’re interested in a full suspension bike. 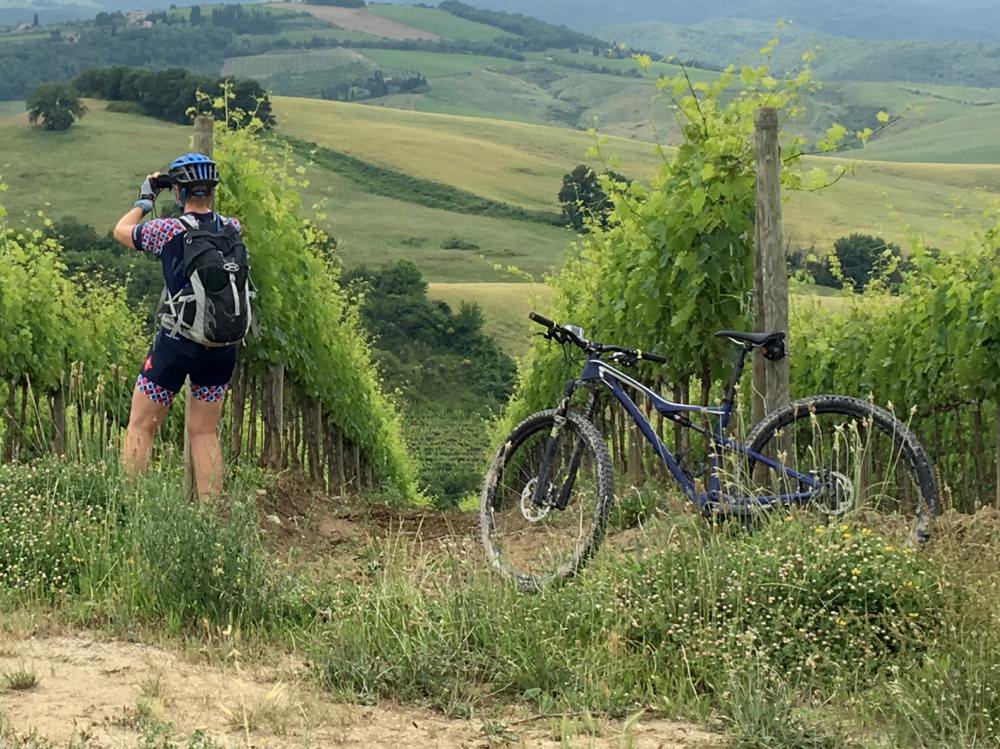 Day 2 : Ride to San Gimignano – 34 km (15 on unpaved roads) – total vertical: 750 m.
Ride across the vineyards and olive groves of Chianti to the famous medieval fortified town of San Gimignano, (the city of the beautiful towers), passing the ancient romanesque church of Sant’Appiano. After a short downhill on unpaved roads across woodland we’ll be climbing the scenic ridge of the hills of Val di Pesa, riding across picturesque vineyards and country stone houses. A quick and fast downhill half on dirt roads and half on tarmac will lead us into the Elsa Valley, where we’ll be riding to San Gimignano, passing the ancient romanesque church of Sant’Appiano and following a scenic section of the Vernaccia Wine Road.

Day 3: San Gimignano to Strove – 31 km (12 on unpaved roads) – total vertical: 500 m.
Ride along the scenic Val d’Elsa following part of the Vernaccia Wine Road and the ancient Via Francigena to the village of Strove, passing the evocative medieval fortified town of Colle Val d’Elsa. Another downhill start for this fourth stage following a scenic section of the Vernaccia Wine Road that runs the ridge of the hills around San Gimignano. After a short climb on tarmac will be riding a few kilometers on flat road to the picturesque medieval village of Colle Val d’Elsa. A quick loop inside its walls following evocative narrow passages before riding a short and steep downhill to the bottom of the valley, where after a few kilometers flat across the lower part of town we’ll meet and follow the original course of the Via Francigena that will lead us to the cosy village of Strove.

Day 4: Strove to Siena – 31 km. (18 on unpaved roads) – total vertical: 550 m.
Ride along the Via Francigena to Siena, passing the ancient romanesque abbey of Abbadia Isola and the picturesque castle of Monteriggioni. Riding shady tracks across woods we’ll reach the scenic castle of Monteriggioni, one of the best preserved medieval fortified villages of Tuscany, passing the evocative Xth century abbey of Abbadia Isola, built on what was a sort of little island in the recently (XVIIIth century) reclaimed marshland. From Monteriggioni to Siena we’ll be riding some scenic rolling hills across woodland and vineyards, enjoying some great views over the approaching medieval city skyline.

Day 5: Siena to Buonconvento – 35 km. (25 on unpaved roads) – total vertical: 400 m.
Ride along the Via Francigena following the rolling ridge of the hills south of Siena with stunning openings over the Val d’Orcia Riding out of Siena the Via Francigena will soon follow the ridge of scenic hills covered with green meadows with spectacular views over scenic Val d’Orcia, recently declared World Heritage Site by U.N.E.S.C.O. During the second part of the ride terrain is mostly flat and compact until we reach the medieval fortified village of Buonconvento.

Day 7: Bagno Vignoni to Ponte a Rigo – 40 km. (30 on unpaved roads) – total vertical: 900 m.
Ride along the Via Francigena to the imposing castle of Radicofani, the highest point of this mtn bike tour. After a steep but short climb to the medieval village of Castiglione d’Orcia, the via Francigena continues along scenic rolling hills with stunning views over the whole valley before descending to the Formone creek. After a few kilometers on single track along the creek we’ll be climbing again to the top of the Radicofani hill, where an imposing fortress was built back in the Xth century. From there an exciting 10 km. downhill will lead us to the bottom of the valley at the village Ponte a Rigo.